The Mahamaham festival is celebrated in Tamil Month of Masi (February- March) in every 12 years. It is believed that in every twelve years, when Sun is in the Zodiac sign of Aquarius (Kumbh), and Jupiter (Guru) enters in Leo (Simha) sign, all these combinations happen on full moon day and at that time Mahamaham festival is celebrated. It is believed that the very same day all the famous rivers of India meet at the tank to wash off all the sins of the people. A huge crowd of pilgrims gather at tank to take a holy dip in the tank as they believe that this purificatory bath may remove the sins. After the bath they serve the deities at the temples around the tank and give charity. During the festival the deities from all the temples in Kumbakonam are brought here for the holy dip in the tank. 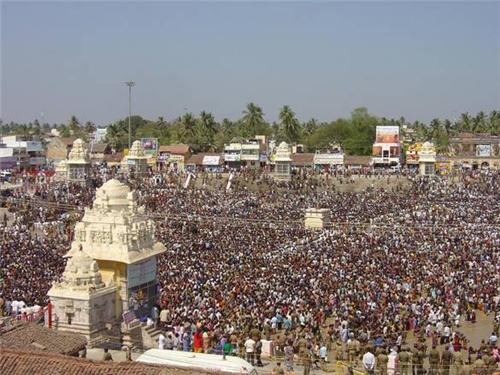 Mahamahan Tank is a holy place where the famous Mahamahan festival takes place. Mahamahan tank is the place where Lord Brahma’s nectar containing pot (Kumbh) came to rest. Lord Shiva broke the pot with his arrow and nectar spilled all over that place and it became Mahamahan Tank. Near Mahamahan tank there is Adi Kumbeshwarar Temple of Lord Shiva where pilgrims visit all round the year. The tank covers 6.2 acres area and it is in trapezoidal shape. There are 16 small mandapams (shrines) around the tank and 20 wells inside the tank.  The 16 mandapams are named as Brammatheertheshwarar, Mukundeshwarar, Dhaneshwarar, Virushabeshwarar, Baaneshwarar, Koneshwarar, Bhakthikeshwarar, Bhairaveshwarar, Agasthyeshwarar, Vyaneshwarar, Umaibakeshwarar, Nairutheeshwarar, Brammeshwarar, Gangatheshwarar, Mukthatheertheshwarar, Shethrabaleshwarar. Pilgrims necessarily visit these mandapams but a vast crowd can been seen there.

The 20 wells inside the tanks are named as

It is believed that taking a one dip in this holy tank is equal to thousands dip in the Ganga River. The real charm of the town can be seen during Mahamaham festival. There are many famous temples located in and around the town of Kumbakonam where pilgrims must visit after attending the festival.

Explore more about Culture of Kumbakonam