Kumbakonam is a beautiful temple town in the state of Tamil Nadu. There are many temples located in and around the town of Kumbakonam which are famous all over the world. Kasi Viswanathar Temple is one of the famous temples of Lord Shiva in the town. It is located near Mahamahan tank. Various hymns of Thevaram are incarnated in this temple.

The Legend behind Kasi Viswanathar Temple

Kasi Viswanathar temple is a Lord Shiva’s temple located in Kumbakonam and it is associated to Ramayana period. When Lord Rama along with Lakshmana was in the search of Sita, they met Sage Agasthya, who advised Lord Rama to worship Lord Shiva in Kasi Vishwanathar temple in Kumbakonam, to become a warrior and fight with Ravana. Lord Rama followed Agasthya’s advise and he succeeded in his wish. It is also believed that nine sacred rivers of India worshipped Lord Shiva in Banaras to remove the sins which were left by the bathers in the rivers. Then Lord Shiva advised them to bathe in Mahamahan tank during Mahamahan festival to wash away all the sins. These rivers requested Lord Shiva to staye in Kumbakonam for the benefits of people in the form of Kasi Vishwanathar. Since, then the temple is located here. 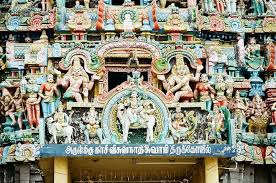 The temple of Kasi Viswanathar importance is due to the presence of nine sacred rivers of India. These rivers are called as Nava Kannikas which meet during the Mahamahan festival.  Due to these rivers this temple is also referred as Nava Kanniyar Temple. These nine rivers are namely as Ganga, Yamuna, Narmada, Saraswati, Kaveri, Godaveri, Krishna, Sarayu and Tungabhadra. Kasi Viswanathar is located close to Mahamahan Tank and a huge crowd can be seen here every year as well as during Mahamahan festival. This temple has two outer courtyards (Prakarams) and it has 72 feet high Rajagopuram. Along with the shrine of Kasi Viswanthar and Lingam there are shrines of Nine Rivers, Mother Mahishasura Mardini, Lord Chandikeswara, Goddess Durga, Saptha Madhas, Sun, Mother Jeshta Devi, Moon, Lord Bhairava,Lingodhbava, Sri Anjaneya, and Lord Dakshinamurthi. Devotees come to this temple for worshipping here to remove curses like pray for girls not attaining puberty in time, to remove obstacles in marriage proposals and to remove sins.

How to Reach Kasi Viswanthar Temple

The best way to reach Kasi Viswanthar Temple is road or rail transport. Kumbakonam railway station is located about 2 km away from the temple and travelling by trains is the comfortable and cheapest way. You can also take auto- rickshaw from the station to reach the temple.

Best Time to Reach the Temple

The crowd of pilgrims can be seen at the temple all round the year, but if you are looking for best time, then, you should visit the town between October and March as the weather is great during that time.  You can also visit the temple during February- March when a ten day festival called Masi Magam is celebrated.