Kumbakonam is a beautiful temple town located in Thanjavur District in the Indian State of Tamil Nadu. It is situated about 40 km away from Thanjavur. The Kumbha means Pot in which Lord Brahma collected all the tools and Vedha Amrutham to recreate the Universe as the Pralaya (dissolution of the Universe) took place at that time. That Pot washed away in the flood and came to the place where Kumbakonam stands now. Thus, this place got the name of Kumbhakonam or Pot's Corner.

In every 12 years a huge festival Mahamaham is organized here which attracts the people from all over the world. This beautiful town is bounded by two rivers, Cauvery and Arasalar. The picturesque places and magnificent temples attract the tourists round the year such as Adi Kumbeswarar Temple, Abhimugesvarar Temple, Kasi Vishwanathar Temple, Nageswarar Temple, Kanchi Kamakoti Peetham Mutt, Bhagavatha Padithurai Ghat, Ramaswamy Temple, Srinivasa Ramanujan House and many more. Kumbakonam is the second largest municipality in Thanjavur District and this town has well connectivity with the nearby cities and state by road and rail transport. Kumbakonam is located about 92km away from the city of Tiruchirappalli and about 275 km away from the city of Chennai; where nearest domestic and international airports are located.

Kumbakonam was ruled by some major dynasties such as Cholas, Pallavas, Pandayas, Vijayanagar Empire, Madurai Nayaks, Thanjavur Nayaks and Thanjavur Marathas. It had great importance during Chola Dynasty and served as its capital during medieval period. Kumbakonam started growing during the British Rule and became the centre of European education and Hindu culture. It was considered as the “Cambridge of South India”.  Kumbakonam was conquered by East India Company in 1799 and it helped it to promote the trade. After independence, this town grew very well, but due to some lack of infrastructure facilities its growth declined. But now the town is developing and tourism and trade are growing here. 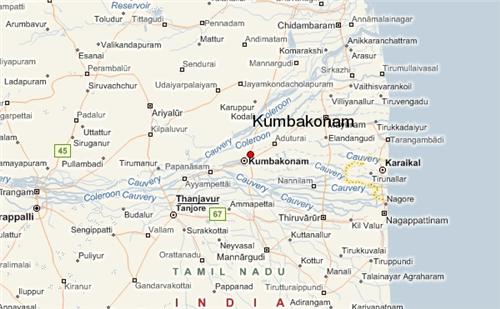 Kumbakonam is located at 10.97°N 79.42°E and at an elevation of 24m from the sea level. The collection of alluvial and black soil can be seen in this region which is good for the cultivation of rice crop. Beside the rice crop, mulberry, cereals and sugarcane are also grown here. Although the temperature rises to 40°C in summer, but the the city enjoys a cool climate during rainy and winter seasons. The best season to visit Kumbakonam is October to March, when pleasant weather adds fun to the visit. The average rainfall in Kumbakonam is 114.78cm.

Kumbakonam is known for its religious culture as there are many temples and mutts or maths (monasteries). Adi Kumbeswarar Temple is the oldest Shiva Temple in the town which was constructed by the Cholas in 7th Century. Kasi Vishwanathar Temple and Nageswarar Temple are also Lord Shiva’s temples in the town. It is said that God Surya (Sun) worshiped Lord Shiva at Nageswarar Temple and thus, God Surya has a separate shrine at this temple. There is one largest Vaishnav (Lord Vishnu) temple in Kumbakonam namely Sarangapani Temple, which was constructed by Nayak Kings in 15th Century. This temple has a twelve storey high tower. There are number of maths in Kumbakonam which depict to the religious culture of the town. The real colour of the town can be seen during the festival of Mahamaham which is organized once in twelve years at Mahamaham Tank. Thousands of pilgrims gather here during the festival to take a holy dip in the tanks as they believe that it helps in getting rid of from the sins. There are thousands of temples located in and around Kumbakonam thus, the town has religious importance.

Kumbakonam is well connected to nearby cities by road and rail transport. But there is no official airport in Kumbakonam. The nearest domestic airport is located in Tiruchirappalli and the international airport is in Chennai. The rest of the journey to Kumbakonam from Tiruchirappalli and Chennai can be continued by buses or trains. Travelling to Kumbakonam by trains is the best option as many express and passenger trains pass through Kumbakonam and connect it to major cities of South India. Trains from Bhubaneswar, Chennai, Mysore, Madurai, Coimbatore, Tirupati, Trichy and Varanasi reach to Kumbakonam. Traveling by trains to Kumbakonam, make your journey easy and comfortable. There are frequent Tamil Nadu State Transport Corporation (TNSRTC) buses, Karnataka State Transport Corporation (KSRTC) buses, and private buses operate to and from the town of Kumbakonam which connect the town with the nearby cities and states. Travelers can also travel by private taxis and cars to reach Kumbakonam from the nearby cities.